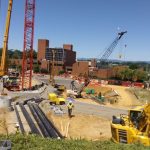 The second tallest man made structure in Roanoke besides the Wells Fargo Tower isn’t another downtown building – its the 240 foot tall crane that was going up today at Carilion Roanoke Memorial Hospital, where work on a new hospital tower is getting underway in earnest after a delay last year due to the pandemic. Besides a new Cardiovascular Institute, the $400 million dollar, 500,000 square foot project includes an expanded emergency department and more hospital beds. January 2025 is the targeted completion date. Marty Misicko is Carilion’s Vice President for Facilities and Construction:

The post Carilion expansion underway in earnest with crane visible from downtown first appeared on News/Talk 960-AM & FM-107.3 WFIR.