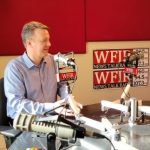 The US Senate has hammered out a tentative bipartisan agreement on a scaled-down infrastructure bill, although the finer points are still being negotiated. But will it pass muster in the House? 6th District Republican Congressman Ben Cline was live in studio this morning. The compromise is about half the size of the original infrastructure package.

Hear the complete conversation with Congressman Ben Cline concerning budget issues below; or watch it on Facebook.