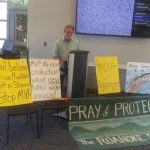 First pointing out that Roanoke City Council has not taken any official position on whether the Mountain Valley Pipeline is needed, Council member Bill Bestpitch did express concern at a news conference this morning that excess sediment in the Roanoke River from MVP construction – which it may cross 133 times – could have an economic impact. Bestpitch said they have not heard from the Governor’s Office or the DEQ about a request for more state money to clean up that sediment. He also said if the endangered Roanoke logperch can’t survive in its native habitat due to excess sediment in the river, that could be the “canary in the coal mine.”