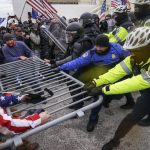 WASHINGTON (AP) — A federal judge has ordered the pretrial detention of a former police officer from Virginia who is accused of ordering guns after he was charged with participating in the Jan. 6 riot at the U.S. Capitol. U.S. District Judge Christopher Cooper agreed Wednesday to keep Thomas Robertson jailed, ruling the former Rocky Mount police officer violated terms of his pretrial release by possessing firearms.

The judge rejected Robertson’s suggestion that 34 guns he ordered before June 29, when FBI agents searched his home, are simply World War II collectables. A government inventory of the guns shows that many of them are recent vintage military-style assault weapons, including three M4 shotguns, Cooper said.

A gun dealer in Roanoke, Virginia, told the FBI that Robertson had 34 guns waiting for him to pick up and that he had recently visited the store to handle them. “Here, a reasonable person could draw the inference that Robertson acted with consciousness of guilt in ordering firearms and ammunition for delivery to the gun dealer. It appears that Robertson may have attached the label ‘Wedding Photos’ to a Venmo transaction that was actually for ammunition, suggesting an effort to avoid detection,” the judge wrote.

The town of Rocky Mount fired Robertson and a second officer, Jacob Fracker, accused of storming the Capitol. Robertson has pleaded not guilty to a charge of obstructing an official proceeding. Robertson was freed after his initial arrest but arrested again July 7 after prosecutors urged the judge to revoke his pretrial release.

The judge noted that Robertson is not accused of engaging in any violence on Jan. 6 but said the “strong weight of the evidence” shows he participated in the Capitol riot. “Since that incident, both before and after his indictment, Robertson has expressed pride in his role and enthusiasm for the prospect of future political violence,” Cooper wrote.

(note: Robertson and Fracker have been offered an undisclosed plea deal they have until Aug. 11 to accept)