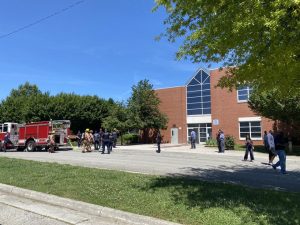 UPDATED NEWS RELEASE: The driver of the vehicle has been identified as Angelia Alexander, 64, of Roanoke.  The cause of the accident is still under investigation.

PREVIOUS: The driver of the vehicle has unfortunately succumbed to her injuries. Name is being withheld at this time pending proper notifications.  The Roanoke Police Department Fatality Investigator team is on scene and still investigating the cause of the accident.

PREVIOUS: On June 17, 2021, at 1503 hours, Roanoke Police were notified of a single-vehicle accident of a vehicle into Addison Middle School.  On officers’ arrival they located the vehicle that had crashed into the structure.  Roanoke FireEMS responded to extinguish the vehicle.  No students or staff were injured.  The adult female driver was transported by Roanoke FireEMS with critical injuries.  This is an active scene and investigators are still looking into the cause of the accident.

The post Name released of driver who died when car crashes into school first appeared on News/Talk 960-AM & FM-107.3 WFIR.