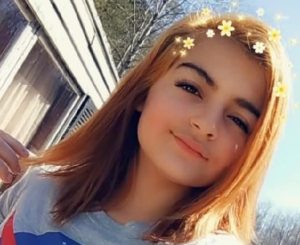 NEWS RELEASE: The Henry County Sheriff’s Office continues to seek the whereabouts of a runaway juvenile who left her home on April 4, 2021.  Elizabeth Claire Rigney, 14, was reported as a runaway juvenile on April 4, 2021, by her mother, Tiffany Jamison.  Rigney was last seen leaving her residence located at 453 Valley View Drive, Bassett, VA.  After being told not to leave home, Rigney voluntarily got into a vehicle and went with her boyfriend, who is also a juvenile.  Rigney has spoken with her mother via phone since leaving the house and is refusing to return home or reveal her location.

Elizabeth Rigney is described as 5’6”, 115 pounds, red hair, and brown eyes.  There is no information to indicate that she is in danger at this time.

Anyone having information regarding Elizabeth Claire Rigney’s whereabouts is asked to contact the Henry County Sheriff’s Office at 276-638-8751 or Crimestoppers at 63-CRIME (632-7463).  The Crimestoppers Program offers rewards up to $2500.00 for information related to crime. The nature of the crime and the substance of the information determine the amount of reward paid.

← Unsurprisingly, Tom Brady Barely Remembers That Super Bowl Celebration
Cline: infrastructure bill as is a no-go for him →