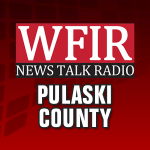 (Update 7/4 PM)  Virginia Conservation Police have identified a body found in the New River as Charles Wallace, 56 of Dublin, according to the Virginia Division of Wildlife Resources and several media reports.

(Previously from 7/4) Team members of the Pulaski County Special Operations team are assisting Montgomery County Emergency Services with a search of a missing kayaker on the New River in the area of Radford Army Ammunition Plant. There will be a high volume of search boats, searchers and possibly a State Police helicopter in the area, try to avoid this area of the river if possible. The kayaker went missing late this morning.