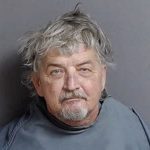 (update 2:20 pm) Update, June 28th, 20212:15pm: Suspect is in custody after a traffic stop in Montgomery County, Virginia. Warrant to be served for Malicious Wounding with additional charges forthcoming.
The Franklin County Sheriff’s Office received a 911 call at approximately 10:10am on June 28th, 2021 alerting of a shooting at the Cannaday’s Store at 24800 Virgil H Goode Highway in Boones Mill. The Franklin County Sheriff’s Office responded, along with Boones Mill Police Department, Virginia State Police and Franklin County Public Safety. One male victim has been transported to the hospital for medical treatment.
The suspect, 55-year-old EMMITT SOUTHERN of Princeton, West Virginia, fled the scene before law enforcement arrived. The suspect is believed to be driving an OLDER MODEL DARK BLUE BLAZER with WEST VIRGINIA TAG NBV-349 and may be traveling 220NB or Interstate 81. The victim and suspect knew one another so this situation is believed to be an isolated incident. Law enforcement are actively searching for this suspect. If you see this suspect or his vehicle, contact 911 immediately.

The post Update: Suspect sought in Franklin County shooting is in custody first appeared on News/Talk 960-AM & FM-107.3 WFIR.