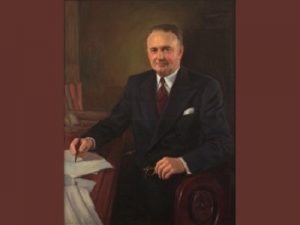 RICHMOND, Va. (AP) — A statue of segregationist Harry F. Byrd Sr., who served as Virginia’s governor and a U.S. senator, will be removed from the state capitol grounds under a bill that won bipartisan final approval from lawmakers Tuesday.

By a vote of 36-3, the Senate advanced the measure that had already cleared the House, sending it to Gov. Ralph Northam, who supports it.

Byrd, a Democrat, ran the state’s most powerful political machine for decades until his death in 1966 and was considered the architect of the state’s racist “massive resistance” policy to public school integration.

“Racism and its symbols, obvious and subtle, have no place in this new Virginia decade,” Del. Jay Jones, the chief sponsor of the bill, said in a statement after the vote.

The larger-than-life statue was erected in 1976 and located a stone’s throw from the Capitol. It depicts Byrd with a copy of the federal budget. A nearby plaque says the statue was dedicated in appreciation of Byrd’s “devotion throughout a long public career to governmental restraint and programs in the best interest of all the people of Virginia.”

Jones’ bill directs the state Department of General Services to remove the statue from Capitol Square and store it until the General Assembly determines what should be done with it.